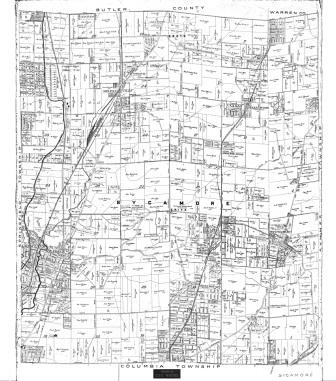 From its rural beginnings in 1803, the Sycamore area has established and maintained one of the oldest forms of government known in America. Brought from England by the Pilgrims, the township form of government is believed to date back as far as 890 A.D.  Sycamore Township’s first claim to fame was Christian Waldsmith’s paper mill, a godsend to pioneers who couldn’t write letters, newspapers that were not able to print and Land Offices grinding their land grants to a halt because the closest supply in Redstone, PA couldn’t always deliver the commodity. But like much of this Midwest’s story, agriculture reigned as the Township’s bread-and-butter economic base throughout the 19th century. Until well into the 20th century, Sycamore Township’s fertile hills and valleys and thick forests served as an agricultural area with a few small communities spread throughout. As the years passed, many of those communities such as Sharonville, Reading, Deer Park, Amberly Village, Blue Ash, Glendale, Montgomery and Evendale gained in population enough to become incorporated cities and withdraw from the township. Sycamore Township sat helplessly while cities nibbled chunks out of it, leaving an odd shaped area bounded by I-75 on the west and I-275 on the north bisected by I-71. Several other communities formed in the unincorporated areas of the township in the 1800’s, including Rossmoyne, Milldale, Breacon and High Point. Sycamore Township remained virtually unnoticed until after World War II when developers moved in to build subdivisions known as Kenwood and Dillionvale and the Township’s population grew from only a few thousand to well over 20,000 in just a few short years. Since then, the northern section of Sycamore Township has become home for many companies’ national and international headquarters. As population in these surrounding communities grew, the 80’s witnessed a spectacular growth in the Kenwood business area with shopping mall expansions and new office complexes being constructed. Kenwood stands as the commercial district – the downtown if you will – with Dillonvale holding its own as the residential character that dominates the western part of the 7-square miles of the Township.